How I started Growing My Business by Bypassing Google Altogether 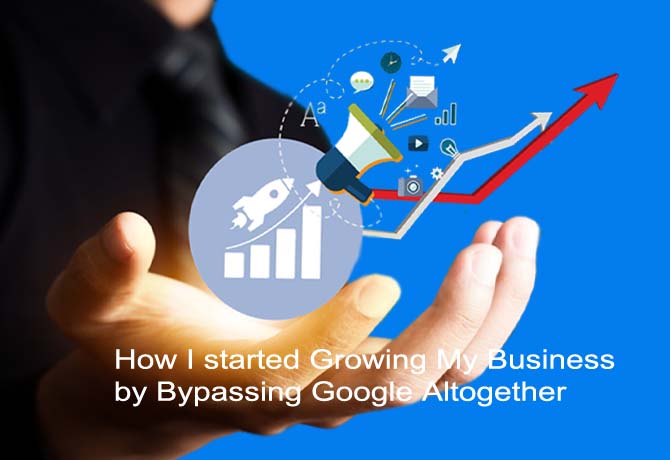 When I first started my online business, I knew how important Google was going to be for its success. Or so I thought. The thing was, I was entering the market a bit late, and all those keywords I wanted to rank for were super-competitive.

I wasn’t sure I was going to be able to make an impact. I knew my business was good, but I just wanted people to know about it, and I thought Google was really the only way. I was wrong. In this article, I’m going to show you how I started to carve my own path by ignoring Google and targeting other avenues so you can do the same.

Why did I start to question if Google was the answer?

You see, I didn’t have much experience with SEO at the time, but I was aware of the general concepts. Everything I’d read had been based around Google, so it was easy for me to think it was the only option. And for good reason – Google is huge for search engines (and lots of other stuff these days). Google actually makes up about 90% of total search engine market share. So I obviously thought it would be foolish to start thinking about other sources of traffic (or other ways to get my business noticed).

After a while, I still wasn’t managing to break into the first page on Google. If you can’t get on the first page, you might as well not even bother. After trying and failing again and again, I thought I’d enlist the services of a local SEO company who (I thought) really knew what they were doing. The trouble was that they were quoting me huge prices that my business simply couldn’t afford yet. I was stuck. I knew I needed to make money, but not enough people were hearing about my business and I couldn’t afford to tell them about it.

So that’s when I started thinking about alternatives. After a few mistakes and a lot of trial and error, I finally started seeing some results. Now I make most of my money from traffic that didn’t even come from Google. While Google is still important, it’s not the be-all and end-all of making money online. So here’s what I looked at:

Direct traffic from relevant authorities in my industry

With most SEO targeting Google, a lot of people have been convinced to almost see backlinks as one thing and one thing only: link juice. While that’s mostly what they’ve become, that isn’t how things always were. That link could actually be something someone clicks on directly rather than something a bot crawls to boost your rankings. And that someone could buy something on your site.

I stopped trying to get lots of backlinks on highly ranked sites to try and boost my rankings, and I started looking at relevant sources in my industry that got a lot of the sort of traffic I wanted. I didn’t care what their PageRank or Domain Authority were because I’d given up on Google. I just wanted real people to click my link who might be interested in what I had to say.

I knew that the foundation to my success online was good quality content. You might have been able to spam your way to the top in the past, but you can’t any more. So when I had a great blogpost, I tried to syndicate it and get it placed on other similar sites to mine that had some clout in my industry. I soon started seeing regular, residual clicks through to my site. What’s more, this process eventually even helped my Google ranking a little bit as those links still provided the link juice I wasn’t even interested in anymore.

Some of you might sneer at this sort of marketing, but I actually found that a few well-placed ads got me more of the traffic I needed at an affordable price. Again, because Google has become huge in the online advertising market too, there are lots of competitive offers if you look elsewhere. Just make sure you’ve done all the calculations and know how much each click is likely to earn you so that you don’t pay too much for them.

I knew how important my email list was going to be, but I didn’t realize how important other people’s lists could be. Not only should you always be looking to grow your own list (make all your calls to action as clear and beneficial as possible), you might also want to start paying for spots on other relevant lists.

One key tip for your own list: don’t spam people with useless junk. People will unsubscribe just as quickly as they subscribed. Offer people value and something they’ll enjoy opening, along with a few hand-picked offers, and you should be onto a winner.

Even though Google might have 90% of the market, that doesn’t mean there isn’t some success to be had with those smaller search engines. 10% of a huge pie is still worth having. And the best thing about those smaller search engines is that hardly anyone is trying to rank for them. While many of the techniques are similar, they aren’t all completely the same. You could find it much easier to get a good ranking on Bing, one that still brings in plenty of the traffic you want.

Here’s another great way to market your business that really helped take mine to the next level – offline. Even though we’re an online business, that doesn’t mean people in my local area didn’t want to know about it. And they’re often some of the easiest to reach. So I went door-to-door with leaflets, put a few local newspaper ads out, and attended local events to help spread the word. The best thing about this sort of marketing is you’ll often be getting to people before they’ve been saturated with similar offers like many online will have. Some of these people might not even know your solution or business existed, so could be a much easier sale.

Hopefully, some of these tips could be enough for you to start making the most of avoiding Google or could even be a supplement to your regular traffic sources.

Peter Ellington has been writing about internet marketing for a number of years and enjoys sharing his knowledge with those interested in the industry. He also likes promoting education so that those entering the industry will have a better chance of success, which is why he writes for a Singapore Tution company.